Statements made and actions taken in the minutes, hours, and days following the accident by all of those involved will have far-reaching consequences in many areas

Develop that portion of your accident response plan now, before the accident happens

- notify those who must be notified in a timely manner

- assure that any facts released are accurate

The law bestows a special aura of truthfulness on excited utterances made by persons involved in the accident immediately after the accident.

Anything you say at this point may be used later by the FAA, a plaintiff, or prosecuting attorney with devastating effect as an admission against your interest (and your employer's) in an FAA enforcement action, civil litigation, and even criminal prosecutions which may arise out of the accident.

Admissions against your interest: An out-of-court statement by a party that, when uttered, is against the party's pecuniary, proprietary, or penal interest and that is admissible under both an exclusion (admission by a party-opponent) and an exception (statement against interest) to the rule against hearsay. Such a statement is admissible even if the declarant is available, because an admission by a party-opponent is non-hearsay and, thus, does not require unavailability.

Although rare in the US, state or local prosecuting attorneys may even bring criminal charges such as murder or manslaughter against individual crew members or others involved in the accident, seeking imprisonment.

Your accident response plan should initially focus on precluding people under your influence or control, such as employees, from making any initial statements about what happened, then assuring that only verified facts, not speculation, are released.

Required notices and reports should be given no sooner and in no greater detail than required.

How to deal with the media, spoken in a patient response: "the accident is being investigated by the NTSB, who are the federal government's experts in aircraft accident investigation and who will determine the probable cause."

Accident: DO NOT file a NASA report - as immunity benefits DO NOT apply if an aircraft accident was involved - if NASA receives a report of an aircraft accident, the report is NOT held in confidentiality but immediately forwarded to the NTSB, where it becomes a matter of public record that can then be used against you in FAA enforcement action and civil litigation

after an accident or certain types of incidents - the operator is required to file a written report with the NTSB on a form provided by the board within 10 days after an accident BUT ONLY if requested for one of the incidents listed - crewmembers are required to attach a statement setting forth the facts, conditions, and circumstances of the accident or incident at the same time if they are physically able - if incapacitated then as soon as they are able

Serious injury means any injury which:

(1) Requires hospitalization for more than 48 hours, commencing within 7 days from the date of the injury was received;

(2) results in a fracture of any bone (except simple fractures of fingers, toes, or nose);

(4) involves any internal organ; or

(5) involves second- or third-degree burns, or any burns affecting more than 5% of the body surface.

Substantial damage means damage or failure which adversely affects the structural strength, performance, or flight characteristics of the aircraft, and which would normally require major repair or replacement of the affected component. Engine failure or damage limited to an engine if only one engine fails or is damaged, bent fairings or cowling, dented skin, small punctured holes in the skin or fabric, ground damage to rotor or propeller blades, and damage to landing gear, wheels, tires, flaps, engine accessories, brakes, or wingtips are not considered “substantial damage” for the purpose of this part.

Fatal injury means any injury which results in death within 30 days of the accident.

Incident means an occurrence other than an accident, associated with the operation of an aircraft, which affects or could affect the safety of operations.

The operator of any civil aircraft, or any public aircraft not operated by the Armed Forces or an intelligence agency of the United States, or any foreign aircraft shall immediately, and by the most expeditious means available, notify the nearest National Transportation Safety Board (NTSB) office1 when:

(a) An aircraft accident or any of the following listed serious incidents occur:

(2) Inability of any required flight crewmember to perform normal flight duties as a result of injury or illness;

(3) Failure of any internal turbine engine component that results in the escape of debris other than out the exhaust path;

(6) Damage to property, other than the aircraft, estimated to exceed $25,000 for repair (including materials and labor) or fair market value in the event of total loss, whichever is less.

(i) In-flight failure of electrical systems which requires the sustained use of an emergency bus powered by a back-up source such as a battery, auxiliary power unit, or air-driven generator to retain flight control or essential instruments;

(ii) In-flight failure of hydraulic systems that results in sustained reliance on the sole remaining hydraulic or mechanical system for movement of flight control surfaces;

(iii) Sustained loss of the power or thrust produced by two or more engines; and

(iv) An evacuation of an aircraft in which an emergency egress system is utilized.

(8) Release of all or a portion of a propeller blade from an aircraft, excluding release caused solely by ground contact;

(9) A complete loss of information, excluding flickering, from more than 50 percent of an aircraft's cockpit displays known as:

(iv) Other displays of this type, which generally include a primary flight display (PFD), primary navigation display (PND), and other integrated displays;

(i) When an aircraft is being operated on an instrument flight rules flight plan and compliance with the advisory is necessary to avert a substantial risk of collision between two or more aircraft; or

(ii) To an aircraft operating in class A airspace.

(11) Damage to helicopter tail or main rotor blades, including ground damage, that requires major repair or replacement of the blade(s);

(12) Any event in which an operator, when operating an airplane as an air carrier at a public-use airport on land:

(i) Lands or departs on a taxiway, incorrect runway, or other area not designed as a runway; or

(ii) Experiences a runway incursion that requires the operator or the crew of another aircraft or vehicle to take immediate corrective action to avoid a collision.

(b) An aircraft is overdue and is believed to have been involved in an accident.

Initial notification to NTSB should contain no more information than is required - see below!

The notification required in §830.5 shall contain the following information, if available:

(a) Type, nationality, and registration marks of the aircraft;

(b) Name of owner, and operator of the aircraft;

(c) Name of the pilot-in-command;

(d) Date and time of the accident;

(e) Last point of departure and point of intended landing of the aircraft;

(f) Position of the aircraft with reference to some easily defined geographical point;

(h) Nature of the accident, the weather and the extent of damage to the aircraft, so far as is known; and

(i) A description of any explosives, radioactive materials, or other dangerous articles carried.

§ 830.15Reports and statements to be filed.(a) Reports. The operator of a civil, public (as specified in § 830.5), or foreign aircraft shall file a report on Board Form 6120.1/2 (OMB No. 3147-0001) 2 within 10 days after an accident, or after 7 days if an overdue aircraft is still missing. A report on an incident for which immediate notification is required by § 830.5(a) shall be filed only as requested by an authorized representative of the Board.

Footnote(s):2 Forms are available from the Board field offices (see footnote 1),

from Board headquarters in Washington, DC, and from the

(b) Crewmember statement. Each crewmember, if physically able at the time the report is submitted, shall attach a statement setting forth the facts, conditions, and circumstances relating to the accident or incident as they appear to him. If the crewmember is incapacitated, he shall submit the statement as soon as he is physically able.(c) Where to file the reports. The operator of an aircraft shall file any report with the field office of the Board nearest the accident or incident.

§91.3   Responsibility and authority of the pilot in command.

(a) The pilot in command of an aircraft is directly responsible for, and is the final authority as to, the operation of that aircraft.

(b) In an in-flight emergency requiring immediate action, the pilot in command may deviate from any rule of this part to the extent required to meet that emergency.

(c) Each pilot in command who deviates from a rule under paragraph (b) of this section shall, upon the request of the Administrator, send a written report of that deviation to the Administrator.

§91.123   Compliance with ATC clearances and instructions.

(a) When an ATC clearance has been obtained, no pilot in command may deviate from that clearance unless an amended clearance is obtained, an emergency exists, or the deviation is in response to a traffic alert and collision avoidance system resolution advisory. However, except in Class A airspace, a pilot may cancel an IFR flight plan if the operation is being conducted in VFR weather conditions. When a pilot is uncertain of an ATC clearance, that pilot shall immediately request clarification from ATC.

(b) Except in an emergency, no person may operate an aircraft contrary to an ATC instruction in an area in which air traffic control is exercised.

(c) Each pilot in command who, in an emergency, or in response to a traffic alert and collision avoidance system resolution advisory, deviates from an ATC clearance or instruction shall notify ATC of that deviation as soon as possible.

(d) Each pilot in command who (though not deviating from a rule of this subpart) is given priority by ATC in an emergency, shall submit a detailed report of that emergency within 48 hours to the manager of that ATC facility, if requested by ATC.

(e) Unless otherwise authorized by ATC, no person operating an aircraft may operate that aircraft according to any clearance or instruction that has been issued to the pilot of another aircraft for radar air traffic control purposes.

Flight crew who are members of a union should immediately notify their union of the accident - union personnel can be of tremendous assistance in diplomatically protecting crew members from the press and preventing uncontrolled release of rumors, speculation, potentially damaging admissions, and inaccurate statements of fact 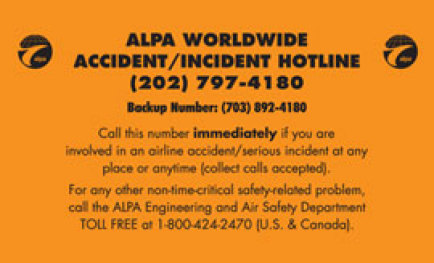 - coordinator between federal government and other organizations (like Red Cross)

What happens after a crash - Geri Silveira - Flying Magazine May 2017