Leaseback: hybrid composite of sale and lease - where as part of the same wrap-around business deal the buyer purchases the aircraft from the seller then turns around and leases it back to the seller for the seller's use

Lease: an agreement, a contract that permits someone else to use an owner's aircraft - aka lease forward

In any lease: (forward or back) the aircraft owner is referred to as lessor and the user as the lessee

Lessor: should check prospective lessee's credit rating before deciding to lease the aircraft to him

If lessee operates or has previously operated aircraft from others, inquire about their experiences with the lessee, especially timely payment and aircraft care and maintenance

- name and address of registered owner

- name and address of lessee

- exclusive or non-exclusive use

Aircraft leasebacks developed primarily as an aircraft sales tool, the leaseback being offered as an incentive to encourage a person to purchase an aircraft she might not feel she could otherwise afford

Sales pitch: under the leaseback, buyer is told she will receive income from FBO's use of the aircraft (rental, charter or flight instruction) - this income will help cover monthly payments for aircraft's financing, inspections, and maintenance - buyer is told she can deduct as business expenses depreciation, insurance, inspection, maintenance, and storage expenses associated with aircraft ownership

Seller/lessee is continually faced with competitive incentive to keep newest aircraft on the flight line - meaning only keeping aircraft under leaseback for a max of 2 years (regular use by non owner pilots tends to age the aircraft fast!) - incentive to make more deals to make more commissions - if unscrupulous seller/lessee will defer needed maintenance when leased aircraft is in high demand for flight operations (especially when warranty is good) then attempt to catch up during slow periods or falsely bill owners for maintenance not performed (hard for owner to prove)

Beware of wet lease: aircraft owner leases aircraft with flight crew - too much like charter operation

Co-ownership: NOT A PARTNERSHIP - owners are co-owners not partners - recall the risk of vicarious liability with partners - should sign a legal document clearly setting out:

Fractional Ownership: special kind of co-ownership - economical for users who will need aircraft for between 50 hours and 200 hours annually

For large and turbine-powered multi-engine - 14 CFR 91.501(c)(1) and (3) provide a very narrowly drawn exception permitting operation under Part 91 under a joint ownership or a time-sharing agreement

1. the aircraft purchase agreement (between seller and buyers)

2. A joint ownership agreement (among buyers/owners)

4. A master interchange agreement (between buyers/owners of all aircraft owned by participants in the management company's fractional ownership program)

Each owner gets access to an appropriate aircraft without the associated management responsibilities for scheduling, crew (not included in light piston fractional ownership), hangar, insurance, inspection and maintenance, at a cost  that may be more favorable than either charter rates or full ownership

The objective of the FOARC was to propose such revisions to the FARs and associated guidance material as may be appropriate with respect to fractional ownership programs.

FOARC was comprised of 27 members representing at least:

In 2000, the committee presented its recommendations to the FAA

1. clarification of responsibility for operational control

4. requirement for a drug and alcohol abuse recognition program for all personnel performing safety-related functions

8. requirement for an FAA approved maintenance and inspection program 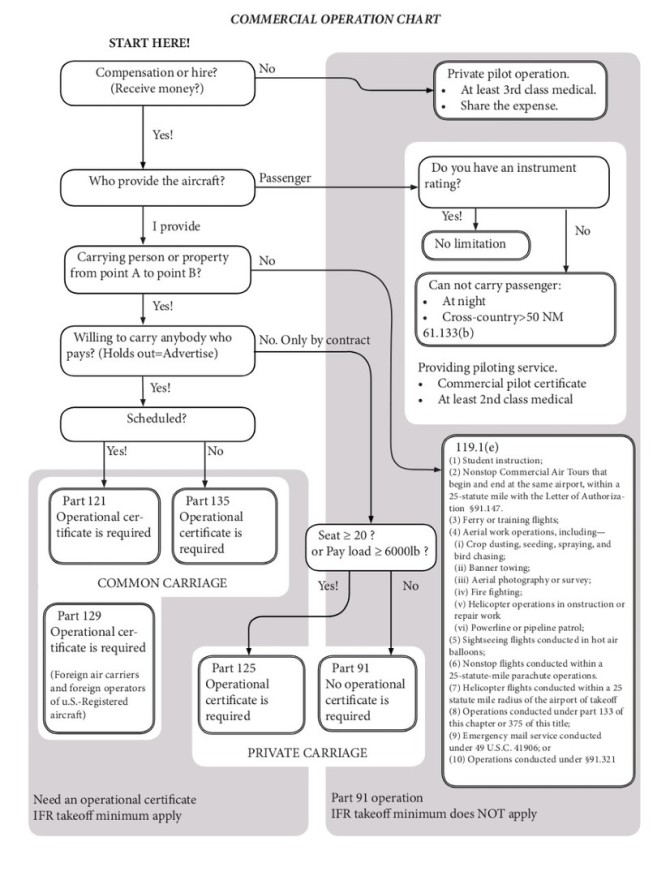 Unauthorized 135 operations continue to be a problem nationwide, putting the flying public in danger, diluting safety in the national airspace system, and undercutting the business of legitimate operators. This letter is a follow-on to the May 2020 Informational Pilot Letter and a continuing effort to remind all pilots to be on the lookout for possible illegal operations. This letter will focus on two ongoing issues; first, the misuse and/or misunderstanding of expense sharing between pilots and passengers. Second, the apparent lack of understanding of pilot privileges and limitations versus operating rules.

When compensation is exchanged for transportation, the public expects, and the regulations demand, a higher level of safety. As a general rule, private pilots may neither act as PIC of an aircraft for compensation or hire nor act as PIC of an aircraft carrying persons or property for compensation or hire. Refer to 14 C.F.R. § 61.113(a). Section 61.113(b) through (h) contains seven exceptions to this general prohibition against private pilots acting as PIC for compensation or hire. One commonly misapplied provision is the expense sharing exception contained in § 61.113(c), which permits a pilot to share the operating expenses of a flight with passengers provided the pilot pays at least (may not pay less) his/her pro rata share of the operating expenses of that flight. Those expenses are strictly limited to fuel, oil, airport expenditures, or rental fees. In addition, only reimbursement from the passengers is allowed.

(NOTE: The § 61.113 exceptions also apply to ATP and commercial certificate holders who are exercising private pilot privileges and also broadly applies under § 61.101 and § 61.315.)

Pilots must also remember, if they want to share expenses under § 61.113(c), they must not “hold out” to the public or a segment of the public to expense share because that would put them into the realm of common carriage—i.e., (1) the holding out of a willingness to (2) transport persons or property (3) from place to place (4) for compensation or hire. As discussed more below, common carriage changes the operating rules under which the flight must be conducted and, necessarily, triggers the higher certification and qualification requirements for pilots required by those operating rules. (See AC 120-12A).

A major point of emphasis to keep in mind regarding expense sharing flights is the “common purpose test”. This means, that the pilot must have his or her own reason for traveling to the destination, not simply for the transportation of the passengers.

It has come to the attention of the FAA that, in general, pilots do not know or completely understand that the privileges and limitations of their certificates are separate and distinct from the operational rules required to conduct a flight, or to put it simply, pilot certification rules vs. operational rules. A person who holds an ATP Certificate or a commercial pilot certificate may act as PIC of an aircraft operated for compensation or hire and may carry persons or property for compensation or hire. However, simply holding a commercial pilot or ATP certificate does not end the inquiry. A commercial pilot or ATP must meet the qualification requirements not only of part 61 but also the part under which the operation is conducted and the operator must hold the proper operating authority. Most operations involving the carriage of persons for compensation require the operator to hold a certificate under part 119 authorizing such operations to be conducted under part 135 or 121. (See 14 C.F.R. §§ 119.1 et seq., 135.1, and 121.1, and definitions codified at § 110.2) A pilot, for a flight operated under part 135 or 121,must meet additional qualification requirements like training, checking, and experience requirements. Therefore, in addition to ensuring compliance with the applicable pilot privileges and limitations in part 61, prior to conducting any operation a pilot must also determine what operational rules the flight is conducted under, whether the operator has the appropriate operational certification (a part 119 certificate), and whether the pilot has the requisite qualifications. Unless a valid exception from operational certification rules applies pursuant to § 119.1(e), operators (could be the pilot under certain circumstances) cannot engage in common carriage, e.g., holding out, unless they are operating in accordance with an air carrier certificate or commercial operating certificate. (See AC 120-12A).

Commercial and ATP pilots should also remember that although these certificates allow them to receive compensation and operate aircraft carrying people for compensation or hire, they themselves cannot hold out the public unless they have been issued a part 119 certificate. (See Legal Interpretation from Mark Bury to Rebecca B. MacPherson (August 13, 2014)).

If you have questions regarding sharing of operating expenses, holding out, or pilot certification rules versus operating rules, please review the FARs, Advisory Circulars, and Legal Interpretations referenced herein and below. Additionally, you may contact your local Flight Standards District Office for assistance or seek the advice of a qualified aviation attorney.

Here’s How to Make Sure it’s Not an Ille[...]
Microsoft Power Point presentation [5.6 MB]